mohanthal recipe | how to make traditional gujarati mohanthal recipe with detailed photos and video recipe. a exotic gram flour fudge or dessert from the traditional ancient gujarati and rajasthani cuisine. this besan and ghee based indian sweet dessert is popularly known as mohanthal, but it is known with other names like, mohanthar or mohan thal too. mohanthal recipe | how to make traditional gujarati mohanthal recipe with step by step photo and video recipe. yet another traditional indian sweet recipe with the combination of besan flour, ghee and sugar. it has a significance resemblance to the south indian mysore pak and also besan burfi, but still differs with the way it is prepared and texture. most commonly, this sweet is prepared during indian festival like diwali, navaratri and gudipadwa.

every year i make sure i visit india, and whilst i am in india i make sure to visit a new place apart from my hometown. during my 2015 india trip, i visited rajasthan and i encountered first time this mouthwatering sweet – mohanthal. initially i was skeptical about this sweet as it was full of besan and ghee and i thought it should be near relative to mysore pak. however i was totally wrong and with my first bite i was already a big fan of this recipe. the best part of this recipe is that it just melts in your mouth and you feel to have more and more.

furthermore, some important tips and suggestions for a perfect mohanthal fudge recipe. firstly, mohanthal should always be rough in texture and should not be smooth like besan burfi. hence, i highly recommend to sieve the besan mixture to achieve the same. secondly, always cook the besan mixture in a low flame. yes it can be tiring and monotonous but the end result would certainly bring cheer. lastly, the sugar consistency is very important in this recipe and i have brought it to 2 strings consistency. while the consistency can be on thicker side but certainly not lesser than it. 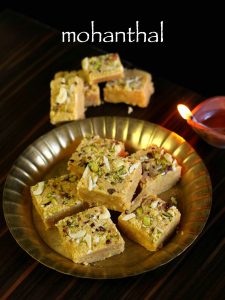 how to make mohanthal with step by step photo:

capsicum bajji recipe | stuffed capsicum bonda | stuffed capsicum pakora with step by step photo and video recipe. indian street food is a mix of spicy chaat recipes, sandwiches, dessert and deep-fried snacks. in terms of the deep-fried meals, most of them fall under the pakora or bajji where an individual vegetable is coated in spiced batter and deep-fried. similarly, this recipe belongs to a bajji category where the entire capsicum is deep-fried till crisp with potato stuffing.
Read more

soya chaap maasala gravy recipe | soya chaap curry | soya chaap sabji with step by step photo and video recipe. north indian curry or particularly the punjabi curries are known for their creamy, spicy gravy curries. these are generally limited to mixed vegetable, paneer, mushroom or a combination of these to make an ideal side dish for indian flatbread. however, there are other alternatives in vegetarian and soya chaap maasala gravy recipe is one such option with meat-like taste and texture.
Read more