wheat momos recipe | veg wheat momos recipe | atta momos recipe with detailed photo and video recipe. basically a type of south asian dumpling which mainly popular in tibet, nepal, sikkim and bhutan. typically the momos are prepared with all purpose flour, however in this recipe wheat flour is used to make the outer cover. i have already shared a traditional version of momos recipe prepared with all purpose flour or maida. however i use to get several requests for a healthy momos recipe with healthy stuffing and especially with wheat. it took me a while to share this healthy wheat or atta momos but i had to share it soon. while the stuffing is more or less the same in both recipe but i have used purple cabbage which gives it a nice taste and texture. i typically enjoy this with momos chutney recipe but it can also be consumed with schezwan sauce recipe. furthermore, some important tips and suggestions for a perfect veg wheat momos recipe. firstly, as mentioned earlier the momos covering can also be prepared with maida or all purpose flour for the authentic taste. secondly, the vegetables added in the stuffing is completely open ended and you can extend it by adding paneer, beans, capsicum and even mashed potatoes. lastly, make sure to roll the momos wrap as thin as possible, otherwise you may not be able to pleat it. 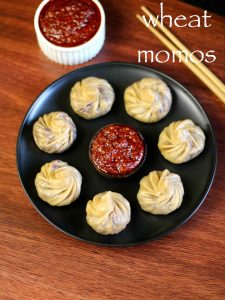 how to make wheat momos with step by step photo: