aloo cheese paratha recipe | cheese paratha recipe  with step by step photo and video recipe. paratha’s are traditionally a breakfast recipe throughout the western and northern part of india. more often, these parathas are served with curd, carrot pickle and topped with butter. cheese stuffed aloo paratha is prepared very similarly to traditional aloo parathas. however, cheese is added to the stuffing to make it more delicious.

paratha’s are usually my fall back option for breakfast for those busy mornings. i usually prepare the roti dough in bulk and keep it for 2-3 days in fridge. recently, i had prepared the stuffed mushroom recipe, for which i had prepared the aloo cheese stuffing. i have reused the same stuffing and but with a new recipe. i have to admit that aloo cheese paratha recipe was hit and tasted even better compared to aloo paratha recipe. paratha’s are one of the popular breakfast recipes in north india. same recipe of paratha’s can be tried with myriad options of stuffing. there are several paratha’s variants like gobi, mooli, paneer, laccha paratha etc. most common one is aloo paratha and this recipe is adapted version to it. cheese stuffing with aloo will enhance the taste of this simple paratha’s. i have not deep fried this paratha’s and i have pan fried it. i wouldn’t recommend deep frying as the cheese may burst out while frying. 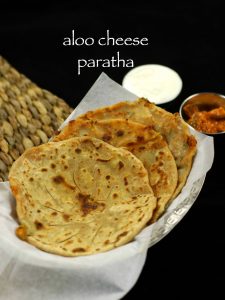 6 summer drinks recipes | fruit drinks | easy refreshing drinks | summer fruit juice with step by step photo and video recipe. the summer season is almost synonyms to the refreshing fruit beverages and the sugar-loaded desserts. with respect to beverages, we either end up getting up in a cafe or go for carbonated sugar-rich beverages. but it can also be made at home with little effort and that too sugarless. today i am covering 6 refreshing fruit juices with this post for the upcoming summer season.
Read more

aloo sabzi for puri | recipe of puri bhaji | poori potato masala | aloo curry for puri with step by step photo and video recipe. potato vegetables is one versatile ingredient and can be used to make different types of recipes. even within the curry section, you can make myriad types by having potato as a hero or side ingredients. but this recipe post describes one of the popular north indian purpose-based gravy curry known as poori potato masala curry served alongside puffed pooris.
Read more