Table of Contents hide
1 watch video
2 recipe card
3 ingredients
4 step by step photos
5 dabeli masala recipe
6 dabeli stuffing recipe
7 cheesy kacchi dabeli recipe
8 notes
cheese dabeli recipe | kacchi cheese dabeli with dabeli masala with step by step photo and video recipe. traditionally dabeli is prepared by stuffing sweet, savory and spicy potato based stuffing to pav or bread and spiced with green chutney and garlic red chutney. the composition is very similar to mumbai vada pav but has different unique taste of its own. after the stuffing, the pav is grilled with butter and tossed with fine sev before serving.

the key ingredient for cheese dabeli recipe holds in its dabeli masala. in other words, the dabeli masala spice mix adds the necessary flavour and taste to the dabeli stuffing. in addition the stuffing is added with pomegranate or anardhana seeds and spiced masala peanuts. pomegranate seeds gives sweet, sour and juicy taste, while the masala peanuts brings the crunchiness to the stuffing. further, the recipe is completed when the stuffed pav is grilled with butter and tossed or coated with fine nylon sev. however in this recipe i have added extra cheese stuffing to make it cheese dabeli recipe. furthermore, some important tips and recommendations for a perfect street style kacchi cheese dabeli recipe. firstly, i have used homemade dabeli masala for this dabeli recipe, however you can use store bought dabeli masala too. secondly, i have used mashed boiled potatoes for the stuffing. alternatively, boiled and mashed raw bananas can also be used for strict jain recipes. lastly, i have added grated cheddar cheese in this recipe, which can be replaced with mozzarella cheese too. in addition you can completely skip cheese to make it plain dabeli recipe.

finaly i would like to highlight my other steet food recipes collection from my blog. this mainly includes, vada pav, pav bhaji, mirchi bajji, sev puri, pani puri, bhel puri and samosa chat recipe. in addition do visit my other popular recipes collection with this post of kacchi cheese dabeli recipe, 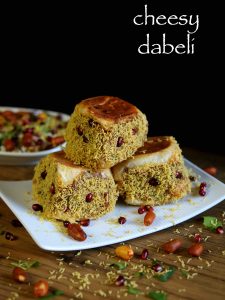 how to make kachhi cheese dabeli with step by step photo: