kadhi recipe | punjabi kadhi recipe | kadhi pakora recipe with step by step photo and video recipe. punjabi cuisine is primarily famous for its creamy based curries. kadhi pakora is one such rich and colourful curry prepared with mixture of curd and bessan flour. more interestingly, it is then topped with onion pakoras which makes it an exotic dish. while across india there are several varieties to kadhi recipe. however, this flavourful creamy recipe is from punjabi cuisine.

while i am not a big fan of kadhi recipe, however my husband loves kadhi pakora recipe. he himself prepares an amazing kadhi pakora recipe. during his bachelor days, he was quite famous with his friends circle for the kadhi recipe. well initially, it was hard to believe for me, but after tasting his recipe i had to completely acknowledge it. moreover, he even adds a tsp of sugar to this recipe which i have skipped it. usually punjabi kadhi is more of sour in taste than sweet. furthermore, i would like to highlight few tips and variations to this recipe. for the kadhi pakora recipe, i have prepared the pakoras with only onion. however, if you prefer you can also make vegetable pakora as well. just add finely chopped cabbage, carrots, potato with onions and follow the same procedure. also, sour curd is preferred for kadhi recipe. moreover, do not forget to whisk the curd properly before transferring it pan. lastly, if you are feeling lazy to prepare pakoras, you can totally skip it. 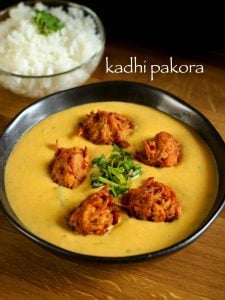