paneer tikka recipe | recipe of paneer tikka on tawa | dry paneer tikka with detailed photo and video recipe. a popular paneer recipe prepared from marinating paneer chunks with spices and yogurt and grilled in a tandoor or tawa. it is an adapted recipe from the popular chicken tikka recipe for non meat eaters or paneer lovers. i have already shared the gravy version of paneer tikka and i wanted to share the dry version in more economical way i.e on tawa. certainly it cannot match the moist result of paneer tikka cooked in a clay oven or tandoor. but this recipe is for those who want to fulfil the crave for tikka’s in most economical way in their own kitchen. being a huge fan of paneer recipes and tikka recipes, i prepare this way quite frequently. i even tried preparing the dry paneer tikka in normal baking oven. however i always fall back to my tawa because of smoky flavour it has to offer. furthermore, some important tips and recommendations for a perfect dry paneer tikka recipe. firstly, i have used homemade paneer chunks for this recipe and i made sure to prepare it on harder side. this because the paneer may loose it shape during the marination and grilling. alternatively you can also use store bought paneer and ask for slightly harder paneer from your grocer. in addition, i have added besan to the curd and spice mix so that gravy becomes thicker and sticky and easily sticks to veggies and paneer cubes. lastly, do not overload the veggies and paneer to skewers and keep it 2-3 paneer chunks in each skewer. 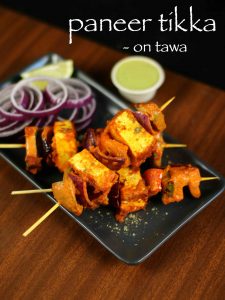 how to make dry paneer tikka with step by step photo: