stuffed mirchi bajji recipe | stuffed menasinakai bajji | milagai bajji recipe with step by step photo and video recipe. an ideal spicy evening tea time snack prepared with green bullhorn chillies. the stuffing is prepared with boiled mashed potatoes and finely chopped onion and spiced by chaat masala and chilli powder. while, usually it is served as a snack, but it is also popularly served as a side dish or appetizer with main course meal.

i have already shared the plain bajji recipe from green chillies which is without any stuffing. however, i was getting several request to prepare the stuffed mirchi. typically, the stuffing is prepared only with mashed potatoes, however i have extended by adding finely chopped onions. onions give the crunchiness to the stuffing and for stuffed mirchi bajji. however, it is completely optional and can be skipped if you do not prefer to. also, add a pinch of baking soda to the besan batter to make the bajji more fluffy and crisp. my first experience with stuffed mirchi bajji was during my annual trip to yeracaud in tamilnadu. my husband bought me these and i took it amusing it to be plain mirchi bajji. but i was really surprised to learn the stuffing inside the bajji. i was always under the impression that mirchi bajji’s were plain without any stuffing. the weather was cool and these stuffed spicy bajjis made my trip memorable. perhaps, deep fried or bajji recipes are quite popular in any hill station. it is typically sold as street food with extra tomato ketchup or tamarind chutney. 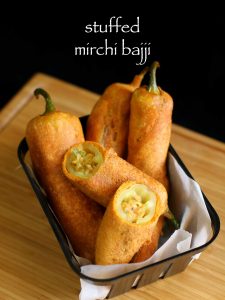 how to make stuffed mirchi bajji with step by step photo recipe:

paneer tikka frankie recipe | tandoori paneer kathi roll | tandoori paneer frankie with step by step photo and video recipe. street food snacks have always been one of the popular demanded snacks recipes. especially with the younger generations who seek something spicy, or a bit of everything in every single bite. these are generally met with the indian street food meals and tandoori paneer tikka frankie recipe is one such roll that has the combination of traditional tikka served in an urban way.
Read more

vegetarian chow mein recipe | veg chowmein | vegetable chow mein noodles recipe with step by step photo and video recipe. indo chinese recipes originated from the kolkata streets, but has taken over the india cuisine since its inception. in the beginning, it was just fried rice and noodles, but has adapted all the variations and extensions of asian cuisine. one of them is the chowmein recipe and the adapted version is the vegetarian chow mein recipe, loaded with vegetables and spices.
Read more