to be honest this my 4th attempt with banana bread and i had actually given up with banana bread. but i was getting continuous  motivation from my husband and i thought of trying this recipe for last time. i use to miss something or other and the bread would turn either too sweet or hard. hence this is a full proof recipe of eggless banana bread recipe. also i have used baking powder and baking soda in this recipe, hence it is a no yeast recipe. this is a vegan banana bread recipe as no butter or milk products used and oil is used as replacement for moist and softness. some important tips, variations and suggestions for a soft, moist and fluffy vegan eggless banana bread recipe. traditionally, banana bread is typically prepared with just plain flour and no wheat flour is used. if you need an authentic banana bread recipe than just use all purpose flour and skip wheat flour. secondly, always use ripe bananas for this recipe. ripe banana would ensure to release more flavour than compared to raw banana. lastly, i have used normal cooking oil as one of the wet ingredient. if you are not a vegan, than replace the oil with butter for more flavour. 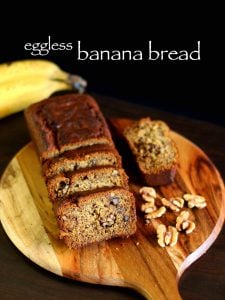 how to make vegan eggless banana bread with step by step photo: