soya chaap recipe | soya chaap stick recipe | soya chaap masala gravy with detailed photo and video recipe. a healthy vegetarian snack recipe prepared from soya bean which is rich in protein and is best alternative to meat or chicken. it is hugely popular in south east asian countries like india, bangladesh and pakistan and is typically prepared with skewers in tandoor or clay oven. Table of Contents hide
1 watch video
2 recipe card
3 ingredients
4 step by step photos
5 homemade soya chaap stick recipe
6 soya chaap curry recipe
7 notes
soya chaap recipe | soya chaap stick recipe | soya chaap masala gravy with step by step photo and video recipe. traditionally it is prepared from soya chunks and soya beans which is grounded together and mixed with all purpose flour. later it is rolled into skewers or ice cream sticks and boiled in hot water till it cooked. it can be either used to prepare gravy for roti and sabzi or as snack.

perhaps this is one of the most requested recipe i have received till now and it took me considerable time for me to post it. to be honest i am not a great fan of soya chaap recipe and i personally do not like the texture of this recipe. but surprisingly my husband has a great interest in and especially in soya chaap masala gravy. in actual fact, he likes any soya recipe and he enjoys it with roti and chapathi. hence i prepare soya chaap stick recipe in advance and i store it for weeks. furthermore, some important tips and suggestions for a perfect soya chaap stick recipe. firstly, overnight soaking of soya beans is mandatory and i would heavily recommend to do so. otherwise, you would not achieve the desirable texture and softness. secondly, add maida or all purpose flour accordingly to the grounded soya bean and chunks dough. it has to form soft and non sticky dough. finally, i have rolled only one layer of soya chaap over the ice cream sticks, however you can roll multiple layers one over the other. it may require more time to be cooked.

finally i would like to highlight my other curries or sabzi recipes collection with this post of soya chaap recipe. it mainly includes, soya chunks curry, soya chunks fry, bhindi masala, bhaingan masala, paneer tikka masala, lauki kofta masala, veg makhanwala, mushroom masala and mrichi ka salan recipe. in addition do visit my other recipes collection with this post like, 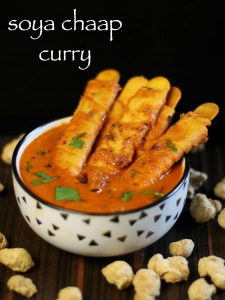 how to make soya chaap stick with step by step photo: