baingan masala recipe | brinjal masala recipe | eggplant masala curry with detailed photo and video recipe. a stuffed baingan recipe, stuffed with peanut, coconut masala which is later cooked in a tomato and onion based sauce. it is extremely popular eggplant recipe and it is ideally served with roti, naan and chapathi and even with jeer rice recipe. baingan masala recipe | brinjal masala recipe | eggplant masala curry with step by step photo and video recipe. brinjal masala recipe is a popular north indian curry recipe which are typically stuffed with peanut and coconut masala. later these stuffed eggplant are cooked in a thick curry sauce which combines with the brinjal stuffing to form flavourful curry. this restaurant style brinjal curry is best suited for dinner and lunch parties and even for potluck parties.

i have already shared a simple stuffed binjal recipe which which is also known as ennegai or yennegai recipe from north karnataka. while i would say, this recipe is an extension to it which is basically with the same stuffing but simmered in a tomato onion based curry. i even prepare the sauce by mixing the cashew paste or yoghurt or both, but i have skipped both in this. i personally like eggplant masala recipe without any creamy sauce but if you prefer you are more than welcome to add and experiment. furthermore, some important tips and suggestions for a perfect and tasty baingan masala recipe. firstly, i highly recommend to use small and tender eggplant or brinjal for this recipe. also make sure to cut the brinjal without tearing them apart as they help in holding masala well. however, if you do not like the curry to be spicy, then reduce the amount of chilli powder. lastly, cook the brinjal on low flame else there are chances for eggplant to burn and remain uncooked from inside.

finally, i would like to introduce my other brinjal and bharwa recipes with this post. this mainly includes, stuffed binjal recipe, bharwa karela, mirchi ka salan, bharwa bhindi, bahingan bharta, vangi bhath recipe, baingan bharta recipe and eggplant sambar. in addition do visit my other collection recipes like, 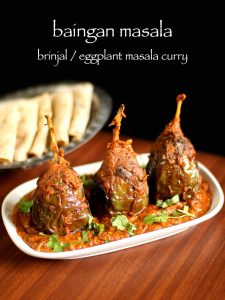 how to make baingan masala with step by step photo recipe: