corn cutlet recipe | crispy corn kabab recipe | corn kebab recipe with detailed photo and video recipe. basically a deep fried kebab recipe which is mainly prepared by grating or blending the corn shells and mixing it with other vegetables. a perfect and mouthwatering snack or appetizer which can be served as starters for party or even as a evening snack. i have already posted a simple veg cutlet recipe which is prepared from boiled potatoes and other mix vegetables. where as in this corn cutlet recipe i have followed the same procedure and binding agent, however sweet corn kernels plays a major role with boiled mashed potatoes in this recipe. also after the potatoes are boiled, i keep it dry so that the cutlet dough remains moisture less and becomes easier to shape it and deep fry. so if you find your cutlets getting dissolved while deep frying, than it could be because of moisture within it. add breadcrumbs to make it further dry. furthermore some important tips and suggestions to make this a perfect and crispy corn kebab recipe. firstly, i have used corn flour as the binding agent for all the vegetables in this corn cutlet recipe. alternatively, even rice flour can also be used to which makes this kabab even more crispy. secondly, the shapes of the kabab is open ended and can be given any shapes as per the choice. it can also be rolled to stick like seek kabab and then deep fried. lastly, the kabab’s should always be deep fried in a low to medium heat. do not deep fry them in a high heat, otherwise the kabab may break in the oil.

finally, i would like to highlight my other snacks recipes collection from my blog. this mainly includes, peas kachori, cocktail samosa, veg puff, nippattu, rava dhokla, achari paneer tikka, dahi ke kabab, baked pav and chilli cheese toast recipe. in addition do visit my other recipes collection like, 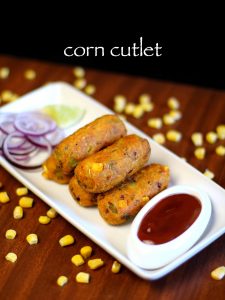 how to make corn cutlet with step by step photo recipe: