pizza bombs recipe | veg pizza bomb recipe | pizza pav recipe with detailed photo and video recipe. a unique way of preparing the traditional and popular pizza recipe, in a ball shaped or pav shaped with the pizza sauce and cheese stuffed inside the baked bread. it can be great snack and also for lunch especially for kids which can be easily heated up in microwave and can be served. this recipe is inspired by the tasty pizza bombs recipe which was prepared with meat stuffing. however in this recipe i have used only vegetarian stuffing like tomatoes and jalapeno. apart from that the major difference i have introduced is brushing of milk on top of dough and baked bread. i have brushed the rolled bread dough with milk which gives a nice colour once the pao is baked. in addition, i have brushed it with the mixture of butter and mixed herbs on top of the baked bread which makes it soft and gives bright colour on top of it. furthermore some important tips and recommendations for a perfect veg pizza bomb recipe. firstly, i have kneaded the dough with warm water, but it can also be done with warm milk too. also make sure to rest them properly for at-least 1 to 2 hours in a warm place. secondly, i have stuffed the pizza bombs recipe with tomato and jalapeno, however it is completely open ended and you can use as per your choice. for meat lovers you can stuff it with pepperoni or ham or any meat. lastly, i have used maida or all purpose flour, alternatively you can use wheat flour too.

finally i would like to include my other international recipes collection with this pizza bombs recipe. specifically, veg pizza recipe, pizza on tawa, french fries, chocolate cake, potato smiley, pizza puff, garlic bread, chocolate lava cake, homemade chocolate, mug pizza and cold coffee recipe. also i request you to check my other recipes collection like, 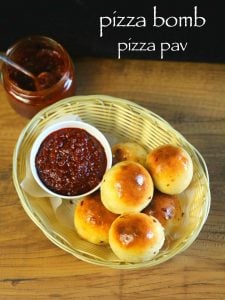 how to make pizza bombs with step by step photo: