vada pav recipe | how to make vada pav | wada pav with detailed photo and video recipe. a popular indian street food recipe prepared mainly with pav bread and deep fried batata vada stuffing. most commonly, this snack is also referred as indian burger or aka bombay burger because it hails from maharashtra or marathi cuisine. generally, it is served as an evening snack, but can also be adapted to breakfast.

Table of Contents hide
1 watch video
2 recipe card
3 ingredients
4 step by step photos
5 vada preparing recipe
6 assembling vada pav recipe
7 notes
vada pav recipe | how to make vada pav | wada pav with step by step photo and video recipe. mumbai or previously referred as bombay is known for its fast life which basically can be seen its mumbai or marathi cuisine. most of the street or any popular tourist attraction places are filled with street vendors with myriad fast food dishes. vada pav is one such easy and tasty fast food dish, filled with carbohydrates and fibre.

unlike the traditional burger recipe, vada pav recipe is much easier and quicker to prepare and assemble it. the critical part of any good wada pav recipe lies in its crispy and savoury vada or batata vada. these patties are slightly different from the conventional aloo bonda or vegetable bonda. basically, the batata vada stuffing is mainly made from potatoes without onion or peas combination. also, it contains a strong flavour of garlic, ginger and coriander leaves. moreover, the patties are typically oval shaped as compared to round bonda’s. having said that, it is not mandatory and can be shaped to round and then later pressed while assembling it. the vada pav recipe is extremely simple to prepare, yet i would like to add few tips and recommendations while preparing. firstly, ensure the boiled and mashed potatoes are moisture free and removed immediately from pressure cooker after it is cooked. if you feel you mashed potatoes contain moisture, fry them in a pan for 2-3 minutes to remove it. secondly, i have added baking soda to the besan batter to make vadas crisper. also, add 1 tbsp of rice flour/cornflour to make it even crisper. lastly, these vada pav should be served immediately after deep frying and assembling. alternatively, you can place the deep fried vadas in a preheated oven or even deep fry again for 1 minute if serving later. 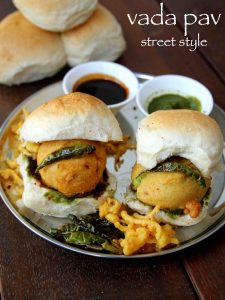 how to make vada pav with step by step photo: