misal pav recipe | how to make maharashtrian misalpav recipe with detailed photo and video recipe. a popular spicy dish from the western india which is made up of a spicy dish misal served bread or pav. the uniqueness of this dish is with its topping and the spicy misal is topped with chivda mix, or sev or farsan. this spicy and lip-smacking dish is typically served for breakfast or as a snack which can be easily extended for lunch and dinner too. misal pav recipe | how to make maharashtrian misalpav recipe with step by step photo and video recipe. there are several ways and variations to this spicy misal pav recipe in marathi cuisine. but the common way is to prepare it with moth beans which contribute to the thick gravy or matki usal and thin gravy which is also known as rassa. before serving, both the gravies are mixed as per the taste and preference and topped with besan farsan as a whole dish.

there are several variations and with a different style of preparations to this spicy misal pav recipe within maharashtra state. in this recipe, i have tried to showcase the mumbai version but the other 2 popular versions are puneri misal (pune version) and kolhapuri misal (kolhapuri version). pune misal pav is typically served with pohe or poha as its base with usal and topped with rassa. whereas the kolhapur misal pav does not pohe but is by far the spiciest of all versions. also, it is generally served with bread slice as compared to pav. further, the other variants include, upwas misal with potatoes and sabudana, dahi misal with a mild taste and the nasik misal which is typically served with pappad. furthermore, some important tips, recommendations and serving ideas for spicy maharashtrian misal pav recipe. firstly, the traditional version of misal curry is always prepared with moth beans, but it can also be replaced with moong beans. you can also use store-bought sprouted mung beans if you cannot find sprout moth beans. secondly, the curry can also be prepared with the combination of sprouts including, mung, peas, moth. this type of curry is known as usal pav recipe and tastes equally great. lastly, i personally like the thin version of the curry and i would recommend the same. the leftover thin version curry can also be served with steamed rice and with chapathi/roti. 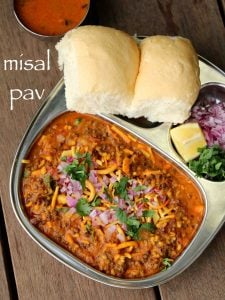 how to make misal pav recipe:

this post is also available in ಕನ್ನಡ (Kannada), and हिन्दी (Hindi)
related articles