Pav Bhaji Recipe | Easy Mumbai Street Style Pav Bhaji Recipe with detailed photo and video recipe. a world-famous fast food dish or perhaps the king of the street food from the western state of maharashtra. the recipe is an amalgamation of vegetables spiced with a unique blend of spices known as pav bhaji masala and served with soft bread roll aka pav. Table of Contents hide
1 watch video
2 recipe card for mumbai pav bhaji recipe
3 ingredients
4 step by step photos
5 notes
6 faqs for the recipe
Pav Bhaji Recipe | Easy Mumbai Street Style Pav Bhaji Recipe with step by step photo and video recipe. pav-bhaji dish has a long history and it originated during the thriving textile industry business in mumbai. the dish was particularly served as a fast-food for the textile workers and thus serving the required nutrients from the combination of vegetables. gradually due to the popularity of this recipe, it eventually turned out to be street food served in every corner of the street.

With the popularity of this recipe, there has been several adulteration and variation to the pav bhaji recipe. today a normal pav-bhaji street food vendor has myriad options to offer. from cheese to paneer and even mushroom flavoured bhaji recipes have surged to the streets. but my personal favourite has always been the simple extra butter tossed red coloured pav-bhaji recipe. as a matter of fact, i have heard a lot of stories from my husband who was a frequent traveller to mumbai during his brief stay in pune. but unfortunately, i personally never got a chance to relish the famous juhu beach or chowpaty street style bhaji, but it is on top of my wish list. Furthermore some important tips, recommendations and serving ideas for street style pav bhaji recipe. firstly, and more importantly fresh and flavoured pav bhaji masala is very crucial to this recipe. basically, it is the heart and soul of this dish and hence never compromise on the quality of it. secondly, you can also extend the recipe by adding other veggies like gobi, carrots, beans and even grated cheddar cheese. in addition, you can totally skip the red food colour which does not add any taste or flavour to this recipe. lastly, i would heavily recommend serving the pav fried in butter and bit of bhaji. this would enhance the flavour of ordinary pav. 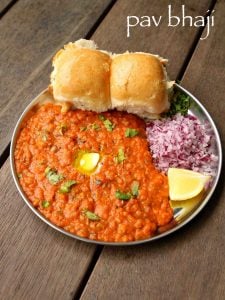 How to make pav bhaji recipe with step by step photo:

Faq’s for the recipe:

what is pav bhaji masala made of?

pav bhaji masala is made of dry roasting the spices individually in the low flame and blend it to form a fine powder. here, spices include coriander seeds, cumin seeds, bay leaf, cloves, cardamom, cinnamon stick, pepper, fennel seeds, kashmiri red chilli, turmeric powder, amchur powder. if the masala is coarse, sieve it and blend the coarse powder once again. preserve in an airtight container for longer shelf life.

what is pav bhaji?

pav bhaji is a world famous fast food or king of street food famous in maharashtra. here the vegetables are mixed with a unique blend of spices known as pav bhaji masala. it is served with soft bread or pav with a generous amount of butter topped with chopped onions and lemon juice.

how to get dark red colour for pav bhaji?

to get a dark red colour for pav bhaji, use kashmiri red chillies. this gives a bright red colour to the pav bhaji and has less spice heat. soak the red chillies in hot water for about 2 hours and blend it to form a smooth paste. add this paste after you saute onions. this gives good colour and flavour to the bhaji. avoid using an artificial colour which is not good for your health. in case, if you are using chilli powder for the bhaji, use kashmiri red chilli powder for the bright red colour.

which veggies we can add? can we make pav bhaji without using onions?

yes, definitely you can make pav bhaji without using onions. just skip the onions keeping all the ingredients the same. usually, they include onions, tomatoes, capsicum, potatoes, peas. but this recipe can also be extended by adding carrots, cauliflower, beans, paneer and veggies of your choice.

how to get the original street side taste for the pav bhaji?

the key point to get the street side taste for the pav bhaji is to use fresh homemade pav bhaji masala. basically, it is the heart and soul for this dish and never compromise on it. firstly, fry the veggies with a generous amount of butter and also top with butter on bhaji which gives the additional flavour to it. secondly, use kashmiri red chillies or chilli powder for this recipe to get the bright red colour to the bhaji. always cook the bhaji in a low flame for a longer time. the more you cook, the more it enhances the flavour of bhaji. finally, fry the pav or bread with a good quality of fresh butter. it will taste great when you prepare hot and spicy.

can we use garam masala instead of pav bhaji masala?

what are the different types of pav bhaji? can we use the pav bhaji masala for other dishes?

what are the things to be eaten with pav? can we prepare it at home?

there are many dishes that can be eaten with pav. some of them include pav bhaji, vada pav, dabeli, masala pav, kanda bhaji pav, pav sandwich, misal pav. yes, pav can be prepared at home using the cooker or pan with all-purpose flour, milk and dry yeast.

what is the difference between garam masala and pav bhaji masala?

for the garam masala recipe, few more ingredients are additionally added here when compared to pav bhaji masala. here, caraway, anise, mace, cardamom, nutmeg and ginger powder are added along with the ingredients of pav bhaji masala. all these are dry roasted individually and blended to form a fine powder and stored in an airtight container for longer shelf life.