i have already shared the paneer frankie recipe in which i have added grated paneer with other veggies. also i had used the left over chapathi for paneer kathi roll. however in this recipe i use the multi grain wrap which makes it healthier as compared to all purpose flour roll. also i have added grated paneer in this recipe, but mashed potatoes and capsicum are in majority. moreover, other vegetables like green peas, carrots and even mushroom can also be added. but i have kept it simple with only potatoes and capsicum. besides some important tips and suggestions for a perfect kathi roll recipe. firstly, if the boiled and mashed potatoes contain more moisture, then add breadcrumbs to absorb it. add breadcrumbs only if you are not able to form sautéed vegetables to cylindrical shape. secondly, i have used multigrain wraps in this recipe. but leftover chapathi, roti, and even paratha’s can also be used. lastly, if you prefer a spicy veg frankie than spread schezwan sauce with tomato sauce on top of  roti/ wraps / paratha’s. 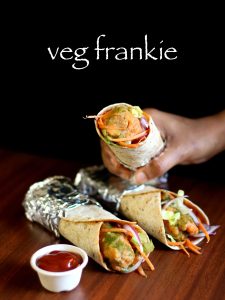 how to make veg frankie or veg kathi roll with step by step photo recipe:

how to fold frankie or kathi roll :