noodle momos recipe | veg noodles momos recipe | veg momos recipe with step by step photo and video recipe. a fusion of traditional tibetan / nepalese recipe with maggi noodles with its taste maker. momos are one of the popular fast food recipe of north eastern part of india and also nepal and tibet. it is ideally served with hot chili sauce or momos chutney recipes.

typically, the outer cover of momos are prepared by all purpose flour which is then stuffed with veggies or meat stuffing. these days even wheat momos are popular but traditionally it was always prepared with maida flour. maida has more gluten compared to wheat and it makes easy to give the desired shape and structure to momos. in short the maida dough is rolled to small circular thin sheets and the maggi noodles stuffing is placed in center. later, the circular thin sheets are pleated to round pocket which is then cooked by steaming. 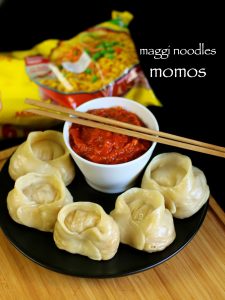 how to make veg noodles momos or veg momos with step by step photo recipe:

this post is also available in ಕನ್ನಡ (Kannada)
related articles