spaghetti recipe | vegetarian spaghetti | spagetti recipe with veg meat balls with detailed photo and video recipe. a staple food of italian cuisine prepared mainly with spaghetti noodles and pasta sauce. in addition, the recipe also contains vegetable meatballs which makes it a complete meal with both proteins and vitamins. there are several variations and style to prepare the spagetti recipe and the sauce used to this recipe. but the most common recipe is to prepare it with freshly prepared pasta sauce and minced meatballs. there are other cheese based spaghetti variations which are even equally popular in western countries. with the cheese based recipes, parmesan cheese is heavily used. however, in this recipe, i have not used any cheese as i personally feel it very heavy and creamy. moreover, parmesan cheese is considered to prepared from calf rennet and hence it is considered to be non-vegetarian. therefore i avoid it in my recipes and it tries to find alternatives to it. however, i did not want to add other cheese like mozzarella or cheddar as it would spoil the entire taste of vegetarian spaghetti. furthermore, some tips and recommendations while preparing the vegetarian spaghetti recipe. firstly, cooking the spagetti noodles is very critical for this recipe and has to be cooked al dente or also known as cooked so as to be still firm when bitten. do not overcook them so that it softens and becomes mushy while serving. secondly, and more importantly, pasta sauce or tomato sauce is very important to this recipe. i have prepared it from the scratch for this recipe but you can also use high-quality store-bought pasta sauce. lastly, you can add 1-2 drops of oil with salt while cooking the spagetti. this ensures to make it non-sticky and also to cook it perfectly. 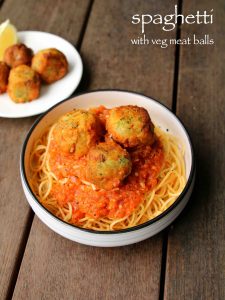 how to make vegetarian spagetti with step by step photo:

Soft Bread Recipe – No Oven, No Egg, No Yeast