jeera aloo recipe | aloo jeera recipe | aloo jeera fry recipe with detailed photo and video recipe. a simple, healthy and tasty cumin flavoured vegetarian curry recipe which is typically served as side dish to roti’s or chapati. perhaps one of the popular bachelors curry or sabzi recipe due to its simplicity and taste which can be prepared without much ingredients in less than 10 minutes. jeera aloo recipe | aloo jeera recipe | aloo jeera fry recipe with step by step photo and video recipe. cumin based potato curry is usually consumed with roti’s and chapati’s, however it also tastes great as side dish to puri and rice. unlike other curries, it does not involve onions or garlic, hence it is also consumed during fasting and termed as vrat recipes. traditionally the recipe is spiced only with jeera powder, but other spices can also be added.

it took me a while to share this simple and healthy aloo jeera recipe for me as i was busy posting other fancy and complex recipe. i was getting several requests for some simple, quick and healthy sabzi and curries recipe. hence i thought of sharing some simple recipe every week which can be prepare in jiffy. i particularly love this aloo jeera recipe which i prepare it frequently and i also prepare chapati roll from the left over chapati. further, in this recipe i have added extra spices like coriander powder and amchur. but it can also be prepared with just cumin powder. while the recipe of jeera aloo recipe is extremely simple, yet i would like to share few tips and recommendations. firstly, i have semi boiled the potatoes in cooker and have not fully cooked. basically the potatoes should be fully cooked in the pan with spices and cumin powder so that it absorbs it. secondly, i have used amchur powder in this recipe for the tangy flavour. alternatively, you can also lemon juice or lime juice for the tangy flavour. lastly, i have partially cooked the potatoes in cooker to hasten the entire process. but you can completely cook it the pan by frying it in regular interval. 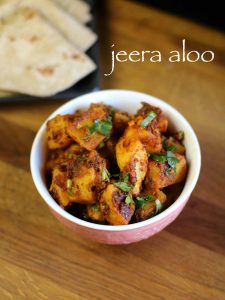 how to make jeera aloo recipe with step by step photo: