paneer pizza recipe | paneer tikka pizza | homemade pizza with paneer with detailed photo and video recipe. basically an indian variation to the popular italian pizza recipe flavoured with marinated tikka sauce and paneer. the recipe is very similar to the one served in indian pizza hut centre with thick crust. also the same recipe can also be prepared with wheat flour as compared to the maida or all purpose flour. tikka pizza recipe has become a common recipe in india and overseas. hence there are several flavours and variations to this fusion pizza recipe. with paneer tikka pizza you can find mushroom tikka pizza, chicken tikka pizza and even aloo tikka pizza recipe. basically the recipe follows the same procedure as any traditional pizza recipe but the toppings is different. the marinated paneer cubes with diced onions and capsicum is placed on pizza. once the paneer cubes are added, pizza base is topped with generous amount of mozzarella cheese and paneer pizza is ready. furthermore some important tips and suggestions for a perfect paneer pizza recipe. firstly, in the marination process i have added only paneer cubes in this recipe. but this recipe can be easily extended and mushroom and aloo can also be added to the marination process. secondly, the pizza base is typically prepared with maida flour. but if you have any gluten allergy than prepared the same with wheat flour base. lastly, i have baked the pizza in traditional oven, however the paneer tikka pizza can also be prepared with tawa too. check my tawa pizza for more information. 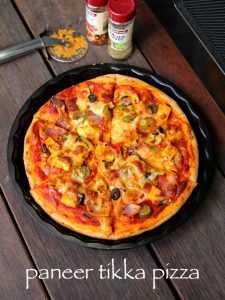 how to make paneer pizza with step by step photo: