while i am not a big fan of soya recipes, my husband is a die-hard and ardent lover of soya chunks curry. to be honest, this is my first soya bean curry recipe on my blog after soya bean cutlet. and perhaps i am posting so late as i do not like. however, i was getting several requests for soya recipes and here we go. moreover, i wanted to prepare the soya bean curry recipe with additional vegetables like peas and potatoes. but later i decided to keep it simple and prepared with basic tomato onion gravy with spices. besides, soya has several health benefits and is highly recommended for vegetarians or non-meat eaters. as per the studies, soya contains a higher percentage of proteins compared to meat or egg. hence soya chunks curry can be an easy alternative to meat or non-vegetarian curry. secondly, soya bean reduces the risk of osteoporosis for menopausal women and also helps to overcome other menopausal disorders. lastly, soya nuggets are a good source of vitamins especially vitamin d and hence it is recommended for kids.

finally, i request you to visit my other veg curries recipe collection from my website. especially, malai kofta, dum aloo, chole masala, veg kurma, bhindi ka salan and sev tomato nu shaak recipe. in addition, do visit my other recipes collection like, 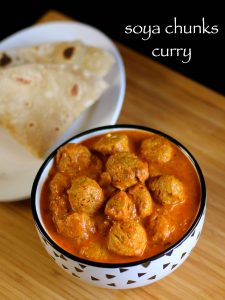 how to make soya chunks curry or soya bean curry with step by step photo recipe: