Table of Contents hide
1 watch video
2 recipe card
3 ingredients
4 step by step photos
5 notes
6 banana leaf thali 50 mins – how to serve food
veg biryani in cooker | how to make vegetable biryani recipe in cooker with step by step photo and video recipe. traditionally the biryani recipes are prepared in big aluminum pot by layering the rice and biryani gravy. once it is layered, it then sealed tightly so that the aroma does not escape and is cooked in a low flame. however this a cheat or quick version to mix the rice and gravy and cook it in a pressure cooker. furthermore, some important tips and suggestions for a aromatic and spicy cooker veg biryani recipe. firstly, always soak the basmati rice for 30-45 minutes before cooking it in a pressure cooker. this not only helps to hasten the cooking process, it also make sure to evenly cook the rice and vegetables. alternatively, you can also add almost cooked basmati rice and layer it on top gravy and simmer in pressure cooker for 10 minutes. lastly, you can also marinate the veggies for 30 minutes in curd / yogurt with dry spices powder mentioned below in recipe card. 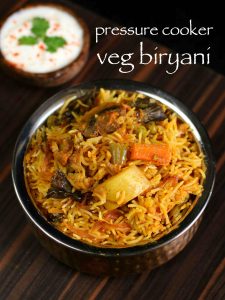 how to make veg biryani in cooker with step by step photo: