momos soup recipe | momo jhol achar | paneer momo dumpling soup with detailed photo and video recipe. a traditional nepali cuisine dumpling recipe served with spicy sesame and tomato based curry or soup which is popularly known as jhol achar. it is most commonly served during the winter season or rainy season due to the extra spice taste it has to offer with the soup or achar. momos soup recipe | momo jhol achar | paneer momo dumpling soup with step by step photo and video recipe. basically an extended version of traditional momos recipe which is served spicy achar or sesame or tomato based soup. it is mainly served as appetiser just before the meal, but can also be served as a starter. in this recipe, paneer based vegetable stuffing is used, but can easily mix and matched with any meat based momos too.

i have already shared couple of basic dumplings or momos recipe including, simple veg momos, noodle momo and wheat momos recipe. but i always wanted to share momo jhol achar recipe since beginning. i still remember my fist encounter to this recipe. it was late night and me and my husband were browsing a lot restaurants in a near by suburb for a decent dinner. accidentally we saw this nepali restaurant and my husband suggested to try this new nepali restaurant. especially he was very much interested with the momos soup recipe as it was interesting and new. to be honest i wasn’t sure about it, but i was already in love with just one bite. furthermore, some important and critical tips and recommendations for best momos soup recipe. firstly, i have used the all purpose flour or maida for momos covering for the traditional taste. alternatively, wheat and atta momos can also be served with same achar or soup. secondly, i have added 3 red chillies while preparing the sesame soup or achar. i found it optimal, however the red chillies number can be increased or decreased based on taste preference. lastly, the same achar can be prepared as momos chutney by grounding to thick consistency. 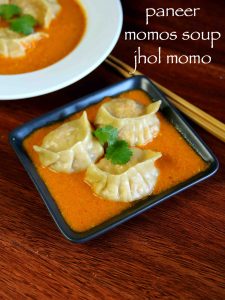 how to make paneer momos soup with step by step photo: