paal poli recipe | milk poli recipe | paal poori recipe with detailed photo and video recipe. a traditional south indian dessert recipe made especially during the festival season of diwali. it is a combination of 2 recipes were deep fried wheat/maida poori is dipped and soaked in an evaporated milk rabdi. it is a very popular sweet recipe in south india especially in tamilnadu and andhra cuisine. 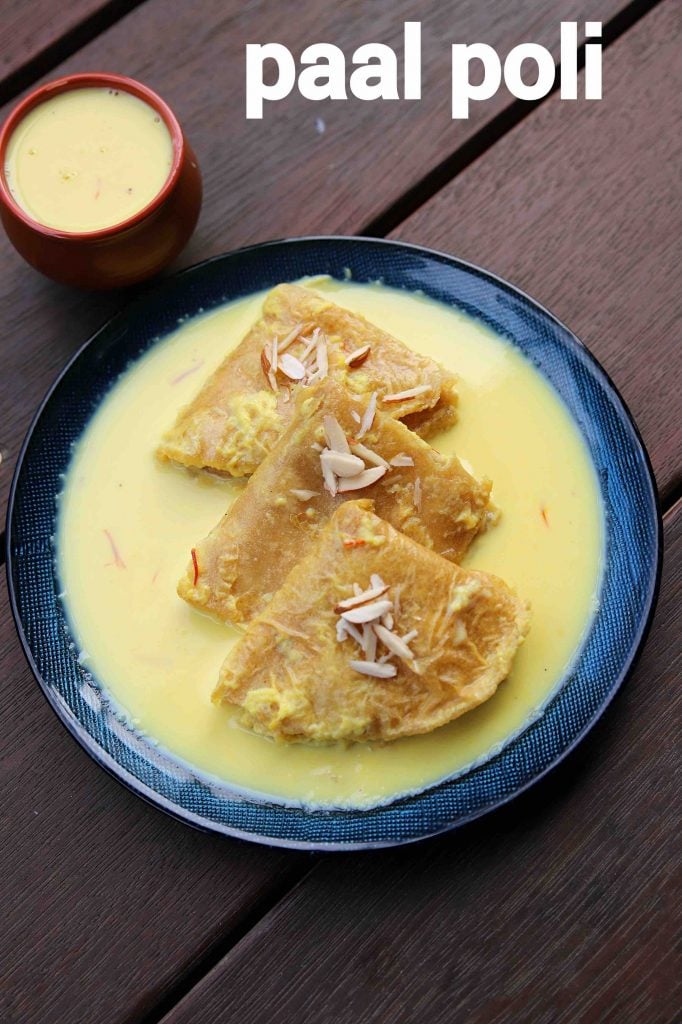 Table of Contents hide
1 watch video
2 recipe card
3 ingredients
4 step by step photos
5 poori preparation
6 paal preparation
7 paal poli preparation
8 poori preparation using rotimatic
9 notes
10 karanji recipe 2 ways – authentic & layered
paal poli recipe | milk poli recipe | paal poori recipe with step by step photo and video recipe. there are hundreds and thousands of indian dessert recipes made with milk. most of them are generally made with curdled milk or chenna which is later dipped in sugar water or evaporated milk. one such our own south indian favourite milk based dessert recipe is paal poli recipe with poori and sweetened milk.

in this recipe, i have shown 2 ways to make deeply fried poori which is later used to dip in the evaporated milk. basically, the first one is the old school or traditional approach with poori’s disc made with rolling pin. and i guess most of them would end up anyway with this approach. but i have also shared another option with rotimatic. in other words, rotimatic has an option to roll out hot and round poori’s discs which can also be used for the same purpose. i personally liked the rotimatic option as it less hassle and easy to make without kneading and rolling. but it is completely up to you and whatever you are comfortable with it.

furthermore, i would like to highlight some tips and suggestions while making paal poli recipe. firstly, in this recipe, i have used wheat flour to make the poori disc to make it healthy. but this can also be made with maida or plain flour to make the poori disc too. secondly, the sweetened milk can also be made with condensed milk or evaporated milk too. i have shared the lengthy version of evaporating milk and then adding sugar. this can be easily skipped with sweetened condensed milk. finally, once the poori’s are deep fried, do not dip it immediately in evaporated milk. let it cool down for 3-4 minutes and pat dry them in tissue paper.

finally, i would like to highlight my other indian dessert recipes collection with this post of paal poli recipe. it includes recipes like rasmalai recipe, basundhi recipe, rasgulla recipe, milk cake, kalakand, sandesh and chum chum recipe. in addition, do visit my other popular indian recipes collection like, 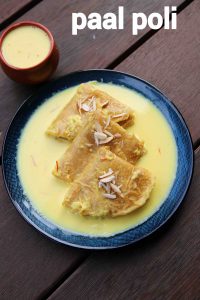 how to make milk poli with step by step photo: