my first encounter to a dhaba style recipes or even my first ever lunch in a proper dhaba was during my annual trip to india in 2015. we had personally arranged the rajasthan and punjab trip to get the authentic culinary tour from both states. my husband was very particularly interested with punjabi dhaba and the thali’s or complete meal it had to offer. i wasn’t interested initially with the plan but half heartedly i accompanied my husband to popular dhaba road side restaurant for our lunch. however i was surprisingly happy that i joined my husband for lunch and i got the first hand experience of dhaba style recipes and especially the paneer masala recipe. furthermore some important tips and suggestions for a perfect dhaba style paneer masala recipe. firstly, always use soft and moist paneer for this recipe. i have used homemade paneer for this recipe, alternatively you can use store bought soft paneer. secondly, use thick curd and creamy curd which ensures the gravy to be rich and mild. also ensure to use less sour yogurt for this recipe. optionally creamy greek yogurt can also be used. finally you can also add cashew paste to paneer masala to make it mild and more creamy. 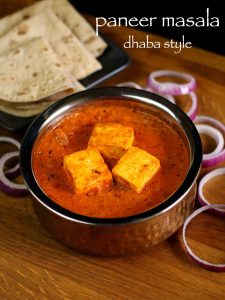 how to make dhaba style paneer with step by step photo:

aloo idli recipe | aalu ki idli | aloo suji ki idli | aloo rava idli with step by step photo and video recipe. dosa and idli recipes are a common breakfast meal for many south indians. but the same rice and urad or even rava based idli or dosa and can be monotonous and you may crave for some unique and different flavoured idli recipe. to solve this problem, i am offering this unique and tasty idli recipe made with rava and an additional ingredient of mashed aloo added to the batter.
Read more

how to freeze vegetables | frozen peas, freezing green beans, freezing carrots, frozen mixed vegetables with step by step photo and video recipe. frozen vegetables are still not familiar with indian audience and there are many misconceptions about it. many believe and prefer to have fresh veggies rather than using frozen food. however, with this post i would like to clarify one thing, it is not just healthy and flavourful to use, but also saves a lot of time in day to day cooking.
Read more