veg dum biryani | hyderabadi veg biryani recipe | hyderabadi biryani with detailed photo and video recipe. a popular spice and vegetables mixed favoured rice dish which is typically prepared by layering the biryani gravy and basmati rice in flat bottom vessel. traditionally the dum biryani is prepared with mix of meat, vegetables and rice, however this a vegetarian alternative with only vegetables. Table of Contents hide
1 watch video
2 recipe card
3 ingredients
4 step by step photos
5 recipe of cooking rice for biryani
6 recipe of biryani gravy
7 assembling / layering veg dum biryani recipe
8 notes
9 healthy kids lunch box recipe ideas
10 bisi bele bath recipe with homemade masala
veg dum biryani | hyderabadi veg biryani recipe | hyderabadi biryani with step by step photo and video recipe. there are several variation and varieties to the biryani recipes which changes with the region and community. but the hyderabadi dum biryani is the most popular recipe and widely appreciated. it is generally served as primary dish in a meal and is often served with choice of raita and mirchi ka salan.

i had already shared a hyderabadi veg biryani recipe and it was prepared without the dum style of cooking. i had used normal kadai with just one layering of biryani gravy and cooked basmati rice. also i had served it with bhindi ka salan but traditionally it is served with spicy mirchi ka salan and also shahi tukda or double ka meetha dessert recipe. however, i personally like it with bhindi ka salan just because i feel the later one as extra spicy. in addition i serve it with tomato onion raita or mint raita which basically helps to lower the temperature of spice in dum biryani. furthermore, some important tips and recommendations for a perfect spicy veg dum biryani recipe. firstly, i have used long grain basmati rice in this dum biryani recipe, however sona masuri rice can also be used as an alternative. also i have cooked the rice and biryani gravy separately, but it can be cooked together similar to my pressure cooker biryani recipe. secondly, i have added freshly homemade paneer to this recipe, but it is completely optional and can easily skipped. lastly, biryani rice always taste better when served next day. i always prepare it for dinner and for next day lunch and it tastes better for my lunch. 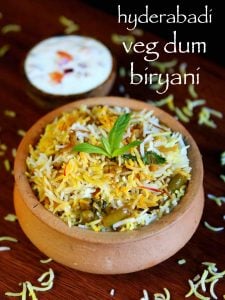 how to make hyderabadi veg biryani with step by step photo:

recipe of cooking rice for biryani: